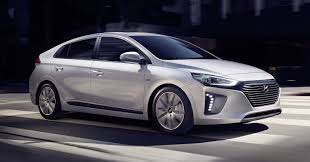 It’s tough to look much past the Toyota Prius if you’re in the market for a hybrid car. They are, after all, the benchmark from which most other hybrids are measured. While there is absolutely nothing wrong with the Prius – quite the contrary, in fact – it’s a welcome sight to see other car manufacturers taking them to task. The Hyundai Ioniq was released in late 2016 and has largely flown under the radar. For background, Hyundai has been in existence since the late 1960’s but has taken the North American automotive space by storm in the last decade, and today offers a full suite of vehicles from boy-racer hot hatches to stylish SUV’s and everything in between. Hyundai’s sister firm, Kia, is also doing phenomenal things right now and both firms really do have the more established manufacturers/brands very nervous because of their high-quality finishes, excellent driving characteristics and (most notably) their prices.

So how does the Ioniq stack up? In short, very well… It’s available in three different drive trains: 1) a hybrid petrol/electric vehicle, 2) a PHEV (Plug-in Hybrid Electric Vehicle) and 3) a full-blown EV (so no petrol engine at all!). The base model hybrid Ioniq comes in quite a bit cheaper than the Prius, starting at £21k versus £24k for the base model Prius – quite a saving indeed. All Ioniq hybrids – the most common model sold – are powered by a 1.6litre gasoline motor that works in tandem with an electric motor to produce 150hp and returns a reported 65mpg. Not too shabby at all.

With respect to styling, I bet I’d struggle to find anyone who would favour the Prius over the Ioniq as, admittedly, both cars are quite similar in looks. But I’d have to give the edge to the Ioniq because of its sleeker lines and additional design detail, not least the blue trim running below both front and back bumpers that adds a nice bit of style. This same colour of blue trim is located on the inside of the car around the air vents and circling the infotainment system, too. Nice.

Speaking of interiors, the Ioniq gives one the impression that they are driving a vehicle that is worth far more than its price tag. Switches feel solid to the touch while the metal-effect trim looks like it was lifted right out of a far more expensive German offering. The interior cabin layout gives plenty of space for passengers in both front and rear while further back the boot space at 450litres is more than ample for any family with plans of half-term road trips. And any jaunt to Ikea will be a breeze thanks to the 60:40 folding seats that gives you 1500litres of total packing capacity. Nice again!

And what of the drive? Most of you appreciate that a hybrid won’t have the handling poise of a front-engine, rear-wheel drive BMW 3-series due to the extra weight from the batteries but nonetheless you won’t be disappointed behind the wheel of an Ioniq. The ride is peppy and smooth courtesy of Hyundai’s more traditional 6-speed automatic gearbox that changes gears with minimal fuss – unlike the Prius with its loud and clunky CVT gear box that sounds as if it is constantly battling to find the right gear.

To conclude, if you’re in the market for a Prius you’d be crazy not to look at the Ioniq as well. You’ll be pleasantly surprised, as I was!

Car Sleuth dislikes: Not the sportiest to drive (but this is a hybrid, after all!)